Four years ago this month and just a couple weeks after my second novel, The Wednesday Sisters, released, I learned it would be on the San Francisco Chronicle bestseller list. A couple weeks later, it hit a national list. I often look at these lists and wonder why some books make these lists while other equally good books don’t. I know in my case, there 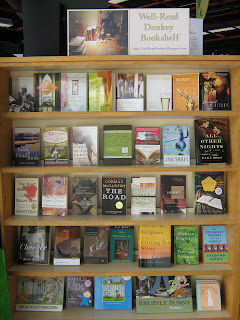 were all sorts of reasons why the stars aligned: an incredibly supportive publishing team; an online buzz that started on Library Thing and spread by generous bloggers whose enthusiasm for the book leaves me ever grateful; a small bit of well-placed media exposure; and friends and family who bought and gifted and spread the word.
But – and perhaps you’ve gotten a glimmer of this from the title of this piece – one huge factor in whatever success I’ve found as a writer has been the support of booksellers. The first bestseller list The Wednesday Sisters hit, actually, was not that Chron list, but rather the list at one of my local independent bookstores, Kepler’s Books.
I’m pretty sure that if you walked into Kepler’s and talked to Nancy Salmon in the summer of 2008, you had a hard time walking out without The Wednesday Sisters in hand. It’s clear from the way it took off – first on one of my hometown independent lists, then on the Chronicle list drawn from sales at the area independent stores, and then on my regional NCIBA indie list – that I owe a big thank you to a lot booksellers, first in California, and then elsewhere as well.

Other local stores have been supportive, too. BookPassage, Mrs. Dalloways, A Great Good Place for Books, Capitola Book Cafe, Bookshop West Portal, and Copperfields have hosted me for readings and put my books in that all important front of store space. Books Inc. – a small local chain of wonderful stores – has not only hosted me countless times, but kept The Wednesday Sisters front of store for most of the first four years after it released. And that’s just in the Bay Area!
It’s stores like these which help new voices find an audience.
Even before I was published, though, great things happened to me in bookstores. My Nashville writing group spent many a great afternoon pooring over each other’s words at the cafe in the now sadly defunct Davis Kidd booksellers, where I also once bumped into Ann Patchett in the fiction section – and was treated to a wonderful conversation over a literary bestseller neither of us, it turned out, had cared for.
This month is, perhaps ironically (but I hope promisingly), not only my bestseller anniversary month, but also the week that the store where it started – Kepler’s – closed its doors. It closed once a few years ago expecting never to reopen, but the community rallied then to keep it alive. This time it’s closing is more optimistic, with a new and improved store scheduled to open again in six soon, thanks to Praveen Maydan (who also owns the fabulous Booksmith in San Francisco).

I’ve done the occasional “Bookstores Worth Browsing” posts in the past, but you may have noticed I’m doing them in a more concerted way at least until the November 13 release of My Bookstore: Writers Celebrate Their Favorite Places to Browse, Read, and Shop (edited by Ronald Rice with illustrations by Leif Parsons and an introduction by Richard Russo), in which more than 75 very swanky authors (well, and me) pay tribute to our favorite bookstores and booksellers. (A portion of the authors’ fees for the essays–including 100% of mine–is being donated to a fund set up by the publisher to support bookseller scholarships to ABA’s Winter Institute, and a portion of the publisher’s revenue is being given to the American Booksellers Foundation for Free Expression.)

Do you have an independent bookstore you love? Please tell me a little about it in the comment section below. And if you are interested in doing a blog post about it, please indicate that as well. I have some author pals who are going to help me spread the word about their favorite stores, but as many bookstores as I’ve been in, I’ve not yet hit them all. – Meg