Few guests checking into the charming Scribe Hotel in Paris realize that during WWII it was the press camp for the Allied invasion forces, that the last person to check out before the Allies walked in was Joachim Hugo Klapper, Gestapo, and the German broadcasting studios there remained intact for the Allies to use.

Few tourists lining up for the Eiffel Tower imagine a swastika on its face, and if any young couple sipping wine on the Pont des Arts (now free of its burden of locks) thinks of the rumble of heavy guns across its wooden planks, we should worry for their romance.

And yet that was Paris in the days before the end of the war seventy years ago. Two million Parisians fled in the weeks before June 14, 1940—the day that Germany occupied Paris. Those who remained must have listened with trepidation to the German-accented French blaring through loudspeakers the news of an 8 p.m. curfew to allow German troops the streets. What followed: arrests, interrogations, deportations to death camps, torture chambers under their very feet. The city’s liberation on August 25, 1944 is widely considered the most romantic moment of the war.

This short walking tour will visit the highlight moments of the liberation. You might stop along the route for some deliciously reviving French chocolate—far better fare than the Hershey’s bars fortified with flour to prevent melting that the Allies carried into the city. 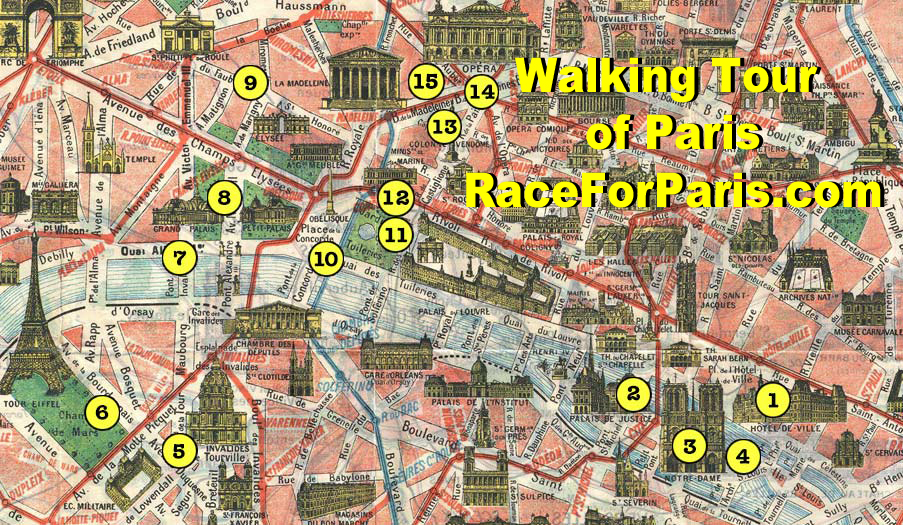 Start at the stunning Paris city hall—the point a small band of soldiers under the charge of Captain Raymond Dronne reached just before midnight on August 24, the day before the liberation of Paris.

Crowds gathering in the square here as the city was liberated were fired upon by German snipers. In the days after the liberation, Charles de Gaulle addressed the liberated city here.

From the Hôtel de Ville, cross the river to…

Walk the short blocks to

The square here was a center of French resistance. And when the German surrender was announced, the Cathedral bells rang joyously. The Allies set up roadblocks here, in case the Germans attacked again.

Behind Notre Dame, this memorial is a moving tribute to those taken from Paris to Nazi concentration camps.

Cross the river to the left bank and turn right, to

5) The Musée de l’Armée at Invalides

The WW II exhibit here is incredibly well done, a terrific primer for Paris during the war.

As you cross back to the right bank on the Pont Alexander III, look left for a nice view of

Imagine the Paris icon with a swastika flag hanging from it, and Hitler visiting. When the Germans occupied Paris in 1940, the French cut the lift cables rather than allow Hitler to rise to its top. (The Germans who hung the flag had to climb its stairs.) The tower remained closed during the war, and the lifts weren’t repaired until 1946.

When retreating Germans were fired upon by French Resistance, they fired explosives, setting off an explosion that was heard throughout the city and leaving the glass-domed hall in flames.

Pause at the corner of

To your left is the Arc de Triumph, which Charles de Gaulle marched through in his victory parade after the liberation.

Cross the road and continue up Avenue de Marigny, to Rue du Faubourg Saint-Honoré. The road angling off to the right here is Rue de Saussaies. Follow it to

This was the Gestapo headquarters during the occupation, and one of several locations in the city where torture took place.

Return to the Rue du Faubourg Saint-Honoré and follow it to the left several blocks, to the Rue Royale. Turn right and head straight for the

During the liberation, the obelisk was surrounded with barbed wire and fortified against bombing. A victory celebration here on August 26 was interrupted by sniper fire.

The German headquarters—where the German commander in Paris, General von Choltitz was captured—was housed in this fine French hotel.

The Ritz hotel here was simultaneously the headquarters for the German Luftwaffe during the German occupation—headquarters to the highest-ranking German officers, such as Reichsmarshal Hermann Göring—and home to wealthy Parisians including Coco Chanel.

The Paris Opera House was Hitler’s first stop in his three-hour tour of Paris.

From the front of the opera house, take the road to the left, Boulevard du Capucines one block to the

This luxury hotel was the German communications center in Paris during the occupation, and the Allied press headquarters in Paris after the liberation. Vogue journalist Lee Miller reportedly stacked her balcony with jerry cans of gasoline—the one thing there was never enough of during the war. And many famous war correspondents—including Ernest Hemingway, Robert Capa, Ernie Pyle, and Martha Gellhorn—drank together in celebration of the liberation of Paris in the hotel’s basement bar.

The basement bar no longer exists, but there is a lovely tea room where you can enjoy a cup of tea or a glass of champagne.

A google map here is marked with many of these locations, along with the locations of press camps in Normandy and other WWWII locations.