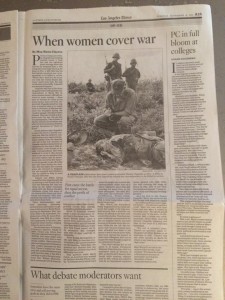 Photojournalist Dickey Chapelle was wearing combat boots, a bush hat and her signature pearl earrings when she was hit by shrapnel from a Viet Cong land mine near Chu Lai Air Base on Nov. 4, 1965. She was the first female American war correspondent killed in action. “When I die, I want it to be on patrol with the United States Marines,” she’d once said. Her last words were, reportedly, “I guess it was bound to happen.”

Chapelle was one of the founding generation of female war correspondents in World War II, when women weren’t officially allowed to cover combat — there were no latrines for them at the press camps, they were told. Undeterred, Chapelle talked her way from a hospital ship to no man’s land on Okinawa, as Marines rescued the wounded during the massive assault. The Navy wasn’t pleased. Two of them, of Marine Johnny Hood before and after he received 14 pints of blood, spurred donations of “rivers of blood.”

It took defiance like Chapelle’s to open the doors to women covering war. Martha Gellhorn, who reported on every major international conflict from the Spanish civil war to the U.S. invasion of Panama, was determined to be on the ground for the June 6, 1944, D-day invasion, even though no female correspondents had been assigned to cover it. She stowed away in the of a hospital ship and went ashore with an ambulance crew, one of the few reporters of any gender to get off a ship and onto land during the invasion. She was taken into custody when she returned to England, but she escaped and hitched a ride on a plane to Italy to cover the rest of the war.

Vogue’s Lee Miller, having committed the unpardonable sin of arriving in one French city before the Germans left, was confined by the Allied command, along with the Boston Herald’s Catherine Coyne, Dot Avery of the Detroit Free Press and other female rule-breakers. They were released only after the Germans were driven from Paris.

Their determination, and their reporting, ultimately earned women permission to get close to the action in World War II, starting in September 1944. One of the first to be authorized, Virginia Irwin of the St. Louis Post-Dispatch, was OKd for a three-day assignment at the front. She stayed for three months, dodging orders for her to return.

Two decades later, in Vietnam, a freelance reporter, female or male, needed only letters from two news organizations to get credentials. But many major news organizations were slow to send women staffers. Gloria Emerson, who’d freelanced in Vietnam in 1956, couldn’t persuade the New York Times to station her there until 1970. And for freelancers and staff reporters alike, it was still a challenge to get to forward areas. Army Gen. William Westmoreland, commander of U.S. forces in Vietnam from 1964 to 1968, tried to prohibit women from staying overnight in the field. He failed.

About 70 American women made a mark on journalism reporting in Southeast Asia. Freelancer Beverly Deepe spent a record seven years covering the Vietnam conflict, and UPI bureau chief Kate Webb’s obituary in the New York Times turned out to be premature: She emerged alive after 23 days’ captivity in Cambodia.

Since Bosnia-Herzegovina in the early 1990s, it’s become commonplace to see women’s bylines and credit lines on war reporting and photography. These days, the question isn’t whether they can do the job, but whether they do it differently than men.

That question made Marie Colvin, an American who worked for Britain’s Sunday Times, bristle. “It irritated me to think that I would be judged as a woman war correspondent rather than as a writer, taking the same risks and covering the same story as my male colleagues,” she said. But, “that said,” she continued, “there are differences…. Women, I think, tend to try harder to understand what is really happening to people on the ground.”

Kim Gamel, the Associated Press’ Baghdad bureau news editor at the height of the Iraq war, said recently that a reporter can learn a lot sitting in the back seat covered by a burka. Tina Susman, now a national correspondent for the Los Angeles Times, was held hostage in Somalia when she covered Africa for the AP. She believes that “as more women have been attacked and lived to tell about it and to return to the field, they have earned the respect of their male colleagues, who can no longer fret that females might be too delicate for the job.”

They don’t always live to tell about it, of course. Freelancer Philippa Duke Schuyler died in a helicopter crash in Vietnam in 1967, as did the AP’s Sharon Herbaugh while covering Afghanistan in 1993. Colvin was killed by an improvised explosive device packed with nails while she was covering the siege of Homs in 2012. One of her final Facebook posts reads: “I think reports of my survival may be exaggerated.”

And the first to fall, Dickey Chapelle. When she received the 1961 George Polk Memorial Award — the Overseas Press Club’s highest honor — the citation said she could “hold her own with men twice her size when it comes to covering a war.” Her death would become part of the story. A fellow war correspondent, Henri Huet, shot the picture: Chapelle receiving last rites in the mud of a Vietnam battlefield.

“It’s not a woman’s place. There’s no question about it,” Chapelle told Mike Wallace in an interview in 1962. “There’s only one other species on Earth for whom a war zone is no place, and that’s men.”

Meg Waite Clayton is the author of five novels, most recently “The Race for Paris,” a fictionalized account of journalists covering the liberation of Paris. megwaiteclayton.com